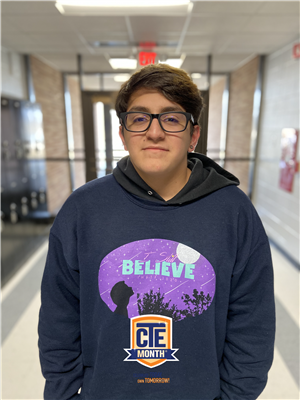 Izaac is a Junior in the Multimedia program at Tech Campus. Izaac, from Zion-Benton, took first place in the Walgreen’s Expressions Challenge for a short film he made with another student, Hope Hildebrandt. For #CTEMonth, Izaac spoke on his success so far in Multimedia and plans for the future.

“I came to Tech Campus because I was interested in a number of different career fields related to Multimedia,” Izaac said. “In just the first year here I’ve gotten two certifications and I’m working on my third one.”

In the Multimedia program, students are exposed to several programs in the Adobe Creative Suite. From Photoshop to Premiere, students learn photo editing, graphic design, video editing, and web design. Izaac said he loves the hands-on approach at Tech Campus and appreciates his instructor guiding him rather than lecturing.

“At Tech there isn’t anyone over your shoulder all the time,” Izaac said. “It’s more college like, where you just get your assignments and Mr. Reed is there if I have questions.”

After high school, Izaac plans on using his creativity in a career and continuing to develop his knowledge of all the software programs.

“I’ve had well over 50 hours here on the programs,” Izaac said. “It’s great because I can explore and go at my own pace, but if I need to expand my knowledge and go further I can do that.”