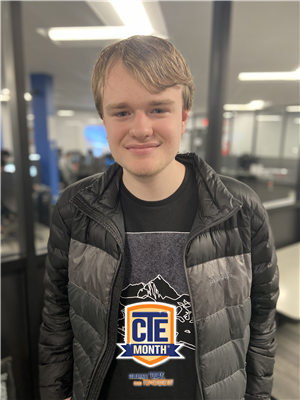 Jack, whose real name is Jonathan, is a Senior at Lake Zurich high school. He is studying video game design in the Game Programming & Virtualization course at Tech. For #CTEMonth, he agreed to speak with us on his passion for video games and his plans for the future.

“I’m really interested in video game design, app development, and this is a very good opportunity for me to learn how to do those things,” Jack said.

In Game Programming & Virtualization, students collaborate to work on games in teams of four. Jack is planning on working in the video game industry after high school and is thankful for that experience.

“It’s been very helpful to work in the same environment as you would in a corporate environment,” Jack said. “When I get older I want to find a career in game design.”

Last year, Jack was in 3D Gaming & Cybersecurity at Tech Campus, where he worked on a team that created a game called “ATC Incident.” That game took 2nd place in a statewide competition known as SkillsUSA.

“ATC Incident was an adventure game that I worked on with three other people,” Jack said. “It helped me boost my confidence a little bit after we won and help me to continue working on games.”