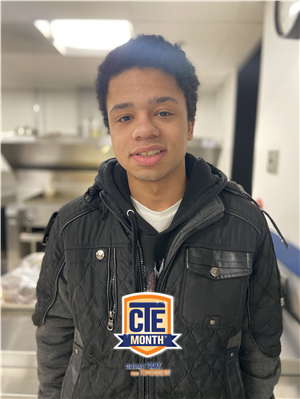 Kenny is a Junior at Highland Park high school, and attends Tech Campus for the Culinary Arts program with Chef Coffee. To celebrate #CTEMonth, Kenny shared his thoughts on Tech and why he is planning on enrolling for a second year as a Senior.

“I came here to learn new things and get a head start in life after high school,” Kenny said. “Tech has been great so far and I’m excited to learn more about culinary next year.”

In Culinary Arts, students are responsible for managing the deli and serving food to students and staff five days a week, which Kenny said has been instrumental in developing his cooking skills.

“Working at the deli has been my favorite memory,” Kenny said. “It’s fun because you get to use a lot of equipment that I’ve never seen before, and learn how to incorporate all of the tools into your cooking.”

Mr. Triplett loves to cook, but his real passion is acting. Over the past couple of years, he has begun his acting career at Highland Park, and hopes to merge cooking and acting whenever he gets a chance.

“If I’m in a play and if people need food before or after going on, I would be happy to help out and cook some food,” Kenny said.